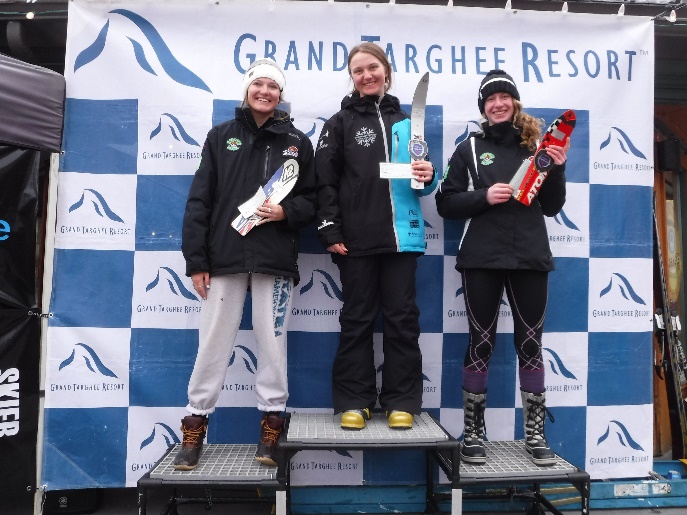 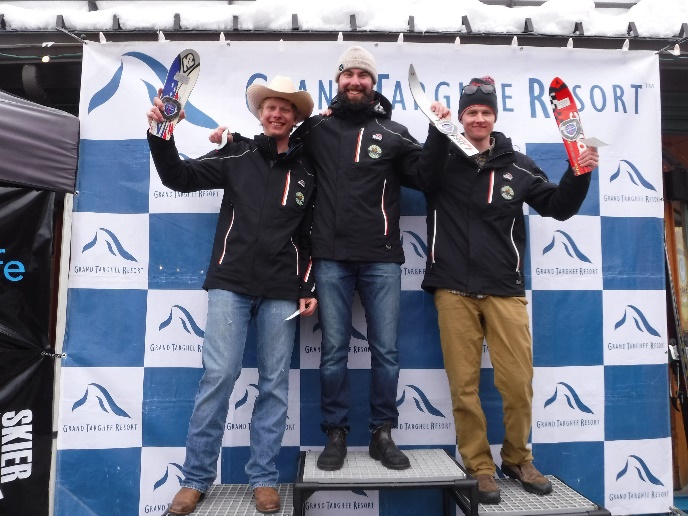 Cory Snyder squeezed past Dylan Weglarz in a tiebreaker to win his 2nd National Championship. Dylan was 2nd overall and Jeffrey Gay was 3rd.

To demonstrate the breadth of Telemark and broaden its visibility, the Karbon National Championships were held at Grand Targhee Resort in Alta, Wyoming in conjunction with the Freeheel Life Cup. Over a hard-fought three days, the Men and Women National Champions were decided after taking the best two of three results from the Classic, Parallel, and Sprint Classic races. A new area for the race division of USTSA, Targhee provided an excellent venue and fantastic conditions for the Championships, the competition to determine the fastest Telemark skiers in the United States. A snowstorm on Wednesday brought in strong winds, low cloud cover and a daily accumulation of about 6”, providing a challenging environment for completion of course preparations. However, as if ordered, the weather shifted Wednesday evening with snow ending late at night and a high-pressure system ushering in a partly sunny day with temperatures in the upper 20s for the first day of racing on Thursday in the Classic.

Development Team athlete Taylor Finn was the first out of the gate, setting the pace in the GS section of the run. Reigning National Champion Lyta Foulk was the next up and quickly reminded the competition of her abilities, posting a clean run and taking over first place. National Team member Farli Boden closed out the Expert Women’s category with a strong run of her own. Farli was clean in the gates but picked up the three second jump line penalty. The Expert men followed thereafter with FIS point athletes Larry Bosche, Birk Larsen, Dylan Weglarz, Cory Snyder, and Garrett Long as the first 5 athletes out of the gate. Of the Men’s field, only Cory Snyder, Dylan Weglarz and Norm Miller would go on to make the jump line.

As is often the case, the jump line penalties were a good indicator of overall position and Cory and Dylan would place 1st and 2nd with 1:26.81 and 1:32.21, respectively, each with one gate penalty. 3rd and 4th places were held by Garrett Long (1:34.56 with a jump line penalty) and Birk Larsen (1:37.57 with a jump line penalty). A complete list of results is available on the US Telemark Ski Team Facebook Page as well as on www.ustsa.org.

There were also several Junior racers with Emma Ruhm of NH and Jeanne Pouezevara Washington as our two Junior Women. The Junior racers and the Citizens completed the same gate section as the Experts but did have a shorter skate section. For the Junior Men, we had entrants in both the Junior 1 (14-17 years old) and the Junior 2 (13 and under) categories. For Junior 1s, Finn Dressen posted the only other clean run of the day and a blazing time of 1:26.30. The Junior 2 category kicked off with Bodhi Boschen and Grant Nylander. In addition to strong runs, Bodhi and Grant could be seen hiking and skiing the powder and moguls next to each start when waiting for their runs. Despite being 10 years old, Bodhi nearly made the Expert Men’s line on most of his runs. Bodhi placed first in the Junior 2 category with an adjusted time of 1:56.75 and Grant was second with 3:11.23. Good Telemark form was the name of the game for the Citizen Men’s podium with the top three racers accumulating one second of penalties each. Veteran racer Scott Edgerton came in 1st, Julien Pouezevara of France was slightly behind in 2nd and Targhee local Bob Marcinko posted a strong 3rd place result. There was also a second Classic race on Thursday afternoon which was not a FIS event but which did count for USTSA points and to provide a second Classic result for the purposes of penalty calculations. Results for that event are also online.

The following day, after the parallel qualifier, the duals portion of the event began with the Men’s round of 32. The second to last race of the Men’s round of 32 pitted Steve Weglarz (19 seed) instructor at Waterville Valley’s Winter Seasonals Telemark program against Sam Garber (16 seed), one of the Winter Seasonals participants. In a close race, Steve beat Sam into the rap and could skate to a 1.36 second victory. After many upsets in the first round, the Men’s round of 16 ended as one may have predicted with all higher seeded entrants getting a victory.

There was a bit less drama for the Women as the top seeded entrants skied consistently, generally outpacing their competitors by similar margins to those during the qualifier. Lyta, Taylor Finn, Farli Boden, and Maria Nappi would move on to the semi-finals. In the Junior Bracket, Thursday’s four entrants were joined by Tait Edberg, a Freeski competitor from Squaw/Alpine Meadows. With 5 entrants, Bodhi Boschen (4 seed) and Grant Nylander (5 seed) were the one pair to race in the quarter-finals. Bodhi was able to outpace Grant and moved on to the semi-finals.

Turning back to the Men, Cory Snyder (1 seed) outdueled Devon Wright (9 seed) and Garrett Long (4 seed) had the slimmest margin of victory in the quarter-finals, finishing 1.39 seconds ahead of Birk Larsen (5 seed). Dylan Weglarz (3 seed) finished ahead of fellow New Hampshirite Miles Fey (6 seed) and Jeffrey Gay (2 seed) laid down a strong run against Jacob Carter-Gibb (7 seed). In the semi-finals, Cory skied a strong run and Garrett wasn’t able to maintain the pace, trailing by 2.18 seconds. However, in the lower half of the bracket, upset was brewing, a very strong run by Dylan led him to defeat Jeff in the semi-finals by 1.01 seconds and move on to the finals with Cory. The large and small finals for the men were the reason the parallel format was created. A fall after the rap led Jeff to finish 0.12 seconds behind Garrett while a fall in the rap caused Cory to take 2nd place to Dylan by 5.36 seconds.

The Junior racers also got a taste of the excitement of the parallel, for the semi-finals and the finals, the largest margin of victory was 1.51 seconds! First up in the semi-finals were Finn Dressen (1 seed) and Bodhi Boschen (4 seed) and despite an excellent qualifier performance, Finn was upset by Bodhi by 1.28 seconds. For the second race, Jeanne Pouezevara (3 seed) was able to oust Freeskier-turned-racer Tait Edberg (2 seed) in a 0.12 second photo finish victory. This led up to Bodhi and Jeanne facing in the final and to Bodhi laying down another blazing run to take first place in the Junior bracket by 1.51 seconds. In the small final, Finn Dressen returned to strong form to defeat Tait in a well fought race.

The Women’s semi-finals continued the demonstration of the dominance of the National Championship podium for the women as Lyta Foulk (1 seed) bested Taylor Finn (4 seed) and Farli Boden (2 seed) knocked out Maria Nappi (3 seed). Lyta continued her strong skiing in the final, notching a 4.43 second victory over Farli and Taylor posted a 2.15 second victory over Maria.

The Sprint Classic on Saturday brought out additional entrants boosting the number of competitors to 40. The Women’s Citizen category rose to 5 as Targhee/Jackson locals Maura Anderson, Claire Vitucci, Marianne Boschen, Bonnie Self, and Lisa Carpenter joined in on the festivities. The Citizen Men’s category also drew five entrants including Scott Edgerton, Julien Pouezevara, Peter Faletto, David Secor, and Rick Hirsch. Harper Boggs led off and was followed by Farli Boden, Lyta Foulk, Taylor Finn, and a new entrant for the competition but a veteran racer, Sara Ellen Godek. Lyta and Farli both posted strong first run times, only 0.5 seconds apart in raw time.

The Expert Men were next up and Jeffrey Gay posted a blazing and clean run time of 57.19. Cory Snyder skied to a 57.06 raw time on the first run but 2 gate penalties set him back behind Jeff. Other notable performances came from Birk Larsen who sat in 3rd place after the first run, as well as from Jacob Cater-Gibb and Miles Fey. Our Junior racers also posted excellent times with Jeanne Pouezevara at 1:32.59, Finn Dressen (with another clean run) at 1:15.58 and Grant Nylander at 2:09.21. The Expert women remained in largely the same places as the first run with Lyta Foulk taking her third FIS race victory of the event, followed by Farli Boden, Sara Godek and Harper Boggs, respectively.

For the Men, Jeffrey again skied a clean run posting a margin of victory of 4.44 seconds over Cory Snyder in 2nd. Dylan Weglarz, Garrett Long and Miles Fey would round out the top 5 for the Expert Men. Jeanne Pouezevara took 1st in the Women’s Junior 2 category while Finn Dressen and Grant Nylander raced to first place in the Men’s Junior 1 and Junior 2 categories, respectively.

After an excellent three days of racing, it was time to crown the National Champions for Men and Women! Calculated as the event points for the best two of three events, the Women were very consistent with Lyta accumulating three 1st place finishes, Farli achieving three 2nd place finishes and Taylor two 3rd place finishes. Their results would win them an engraved award from Colorado medals company, Kiitella as well as $200, $125, and $75 for 1st, 2nd and 3rd, respectively. The prizes were the same for the Men. Cory and Dylan both took home a first and second place finish so a tiebreaker was needed to determine the winner. Based off total combined time (using the parallel qualifier) the tiebreaker went to Cory due to his victories in the qualifier and Classic over Dylan. With his strong skiing in the Sprint, Jeffrey moved past Garrett into 3rd place, taking the final spot on the podium.

Read the more detailed recap of the event