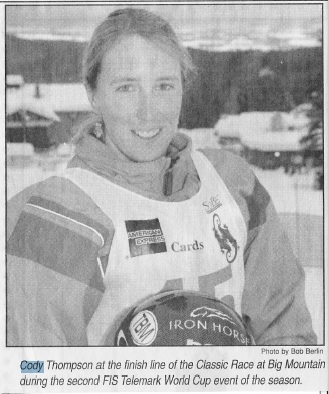 Cody (Nicole) Thompson grew up in Minnesota and learned to ski and then race in Highland Hills near Bloomington, MN.  She later moved to Colorado and raced for Team Breckenridge from 1986 – 1992  and was nationally ranked in the top 10 in Downhill and Super G in 1990-1992.

Thompson earned a two-year scholarship for ski racing in 1991; later that year, she raced in the World University Games in Zacopane, Poland and placed 24th in the Downhill.

She tuned skies and worked in ski shops to support her racing.

Thompson moved to Whitefish, Montana in 1993.

Cody claimed her first US Telemark National Championship in her first year of competitive Telemark racing.  The Championships were held at Big Mountain, her home ski hill, for the first time.

“The whole weekend was a lot of fun.” Thompson said of the races.  “The Thursday night telemark race league has really helped a lot and it’s great to see all the competitors here.”

Thompson also claimed the US Alpine Masters Overall Championship this same year.  This was her 2nd masters championship. 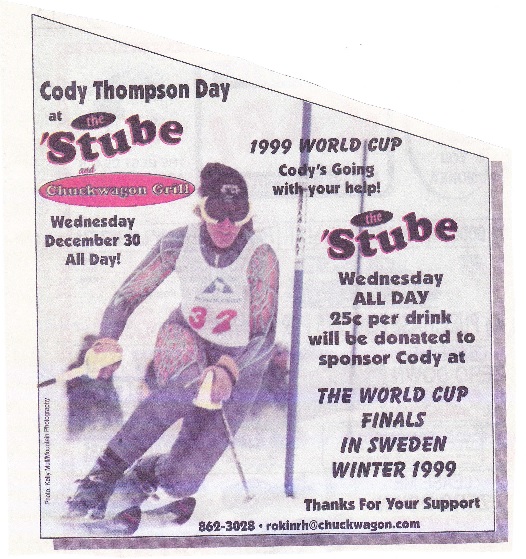 This was Thompson’s first year of racing at the World Cup level.

“American Telemark skiers can’t really make enough with their sport to live on.” But according to Persons It’s not the money that keeps these skiers going.  “It’s something much more precious.  It’s the love of the sport.” —US Team Member Neil Persons 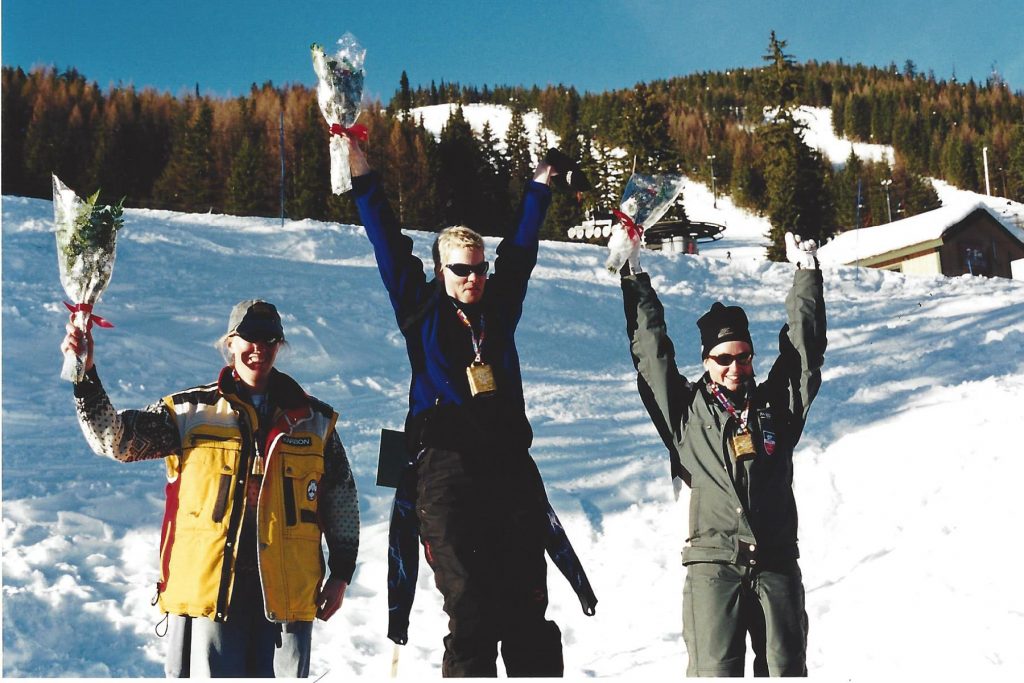 Big Mountain hosted a series of World Cup races this season and Cody Thompson place 3rd in two of the three races.

“With so many US Team members from Whitefish, the crowds have been amazing,” commented Thompson. “At all the World Cup races we’ve been to in Europe, I’ve never heard a roar from the crowed like that, anywhere…”

Thompson was the Silver Medalist in the World Cup overall.  She placed first in the Classic at Kimberly, BC  and finished the World Cup season with 6 podium finishes.

Cody did not compete at the 2000 National Championships this season.

In 2000, Seven of eleven US Team Members lived and trained in Whitefish Montana at the Big Mountain.  Chris Rice and Taug Boschen moved to Whitefish to train with “Team Fish.”  Read More about “Team Fish.” 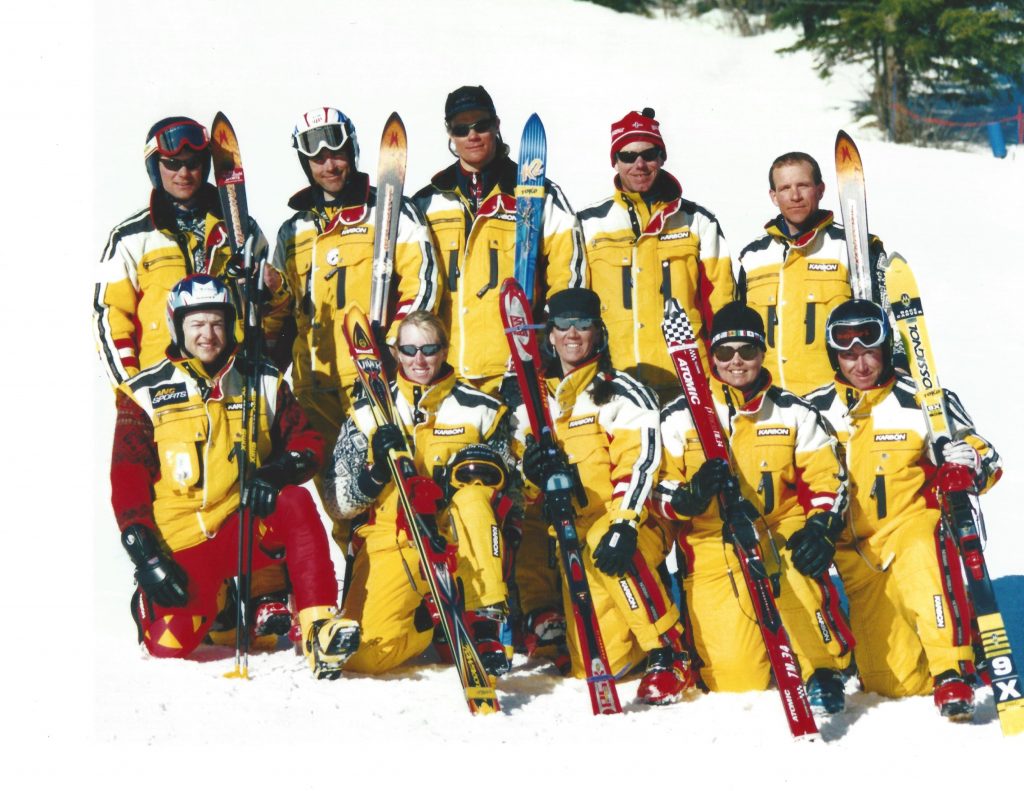 Thompson had 2 podium finishes in Hafjell, Norway, third place in both the Giant Slalom and the Sprint Classic.

She finished 6th Overall in the World Cup standings.

World Cup returned to Big Mountain in Whitefish Montana for 6 of the 17 World Cup races held in 2002.

Thompson had 2 podium finishes with a 2nd place in the Sprint Classic and a third place in the Giant Slalom.  She only raced the World Cup events in the USA this season and finished in 10th place overall.

We do not have a record of this year’s National Champions at Crested Butte, CO.  It is likely that Thompson was the winner, if she was there.

In 2002, Thompson placed 3rd in the Arctic Man ski/snowboard race in Alaska

Following her racing career, she participated in Ski Joring events in Whitefish.

In 2010, the US Telemark National Championships were held at Whitefish Mountain Resort (formerly Big Mountain) and Cody entered these events after years of retirement.  She raced to third place overall with 2nd place finishes in the Classic, Sprint Classic and Slalom and a 3rd place finish in the Giant Slalom.

Cody plays competitive hockey in Whitefish where she lives with her husband and two children. 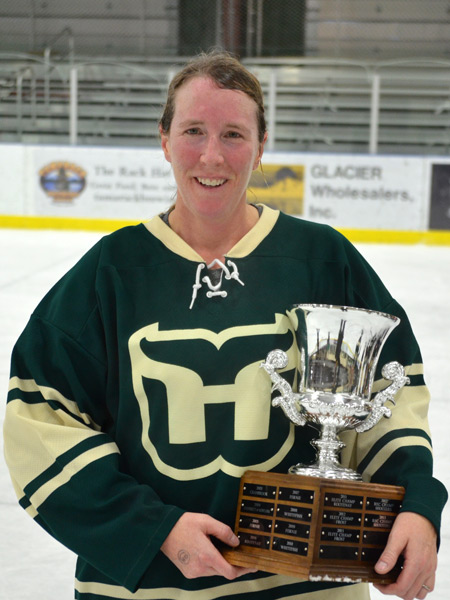