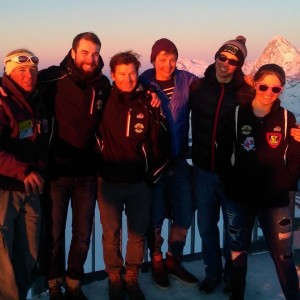 Following on the heels of the US Telemark National Championships members of the US World Cup Team traveled to Europe to compete in the final World Cup events of the year.

Lyta Foulk traveled to Rjukan, Norway and competed as the youngest women earning 12th and 14th place finishes in the two Sprint events.  She then traveled to Murren, Switzerland where she met her teammates Cory Snyder, Tommy Gogolen, Tanner Visnick and US Coach Ty Upson.    While there, Team USA picked up a new team member, Nicolas Belissent, who is 16 with dual French – US citizenship. He grew up in California and learned to ski at Truckee. He has been on telemark skis for four years, and is currently living in France.

The Classic event was held on the first day of WC Finals.  The conditions for the first day of racing were interesting with cold and strong winds at the top of the run, but down at the bottom it was warm and still. It was a mixed bag of results for the US Team with the top man and woman doing well. Tanner skied well in all phases and had an 8th place finish.   Lyta, who was struggling with a cold, skied clean with no penalties and had the 7th fastest skate time, but had difficulties in the GS portion. She finished 14th. The remainder of the team either crashed and disqualified (Cory) or crashed and did not finish (Tommy and Nicolas).

Day two was the Sprint and was a beautiful day in Murren and a much better day for the US men. Cory in 10th nipped out Tanner in 11th.  Tommy finished 20th and Nicolas was 34th. Lyta was 16th in the women’s race.

The final event of the season was the Parallel Sprint.  The men all qualified for the round of 32 and had good races in the first round, but were unable to advance to the round of 16.  .  Lyta did not start because of her cold.

Following the race, the awards and dinner were on top of the Schilthorn (9,744 ft) at Piz Gloria.  Crystal Globes were awarded to the top racers of the season.