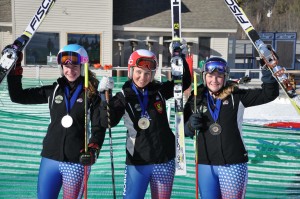 Over sixty different athletes competed in the Karbon National Championships March 4-6 at Crotched Mountain in Bennington, New Hampshire. Traveling from Montana, Utah, Idaho, Colorado and across the Northeast, telemark skiers came out for a beautiful three days of racing. With mostly sunny conditions, racers in the Expert, Citizen and Junior divisions navigated Giant Slalom gates, the jump, the banked turn or Reipelokke, and the skate section to complete each course.

Lyta Foulk and Tanner Visnick, both of Steamboat Springs, CO were crowned as the 2016 women’s and men’s National Champions after winning every race during the event. On the podium with Lyta were Farli Boden of Sandpoint, ID in second and Sarah Carley of Brentwood, NH in third.  On the men’s podium were Jeffrey Gay of Steamboat Springs, CO in second and Cory Snyder of Franconia, NH in third place.

These top three women were pushed by team members Taylor Finn of Colorado Springs, CO, Melinda Long of Rowayton, CT and Sara Godek of Gilford, NH who finished in fourth, fifth and sixth respectively. The top men were challenged by Tommy Gogolen of Breckenridge, CO, Birk Larsen of Park City, UT  and Garrett Long of Royayton, CT who were the fourth, fifth and sixth placed men.

The fastest Citizen on the hill was Erik Hall of Hooksett, NH. Aren Moynihan of Keene, NH was the top Junior racer and ten year old Owen Wood of Pepperell, MA was the youngest. 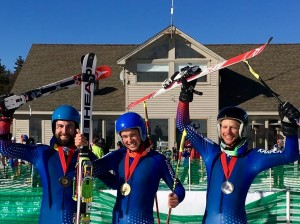 The day following Nationals, team member Lyta Foulk flew to Rjukan, Norway to compete in the World Cup. Following Rjukan, she will meet teammates Cory Snyder, Tommy Gogolen and Tanner Visnick along with Coach Ty Upson in Muerren, Switzerland for World Cup Finals. All of these athletes fund their own racing and take time away from school and their jobs to compete at the highest level of their sport.

Friday’s race, the Classic, ran all the way from the top of Satellite Summit to provide over 260 meters of vertical drop and challenged athletes with a skate section more than twice the length of the other events. With over 35 gates to navigate as well, the classic requires racers to maintain proper form to avoid penalties while also preparing for the skate at the end of the run. Friday’s events consisted of two separate Classic races, each consisting of one run.

Saturday, racers faced a similar course to the Classic except for a shorter skate and fewer gates. The Sprint Classic, held Saturday, is designed to test a racer’s speed and power when contrasted to the form and endurance which are the focus of Friday’s event. Again under sunny skies with firm but grippy conditions, racers from the US Telemark Ski Team, the Canadian Telemark Ski Team and 10 Junior and Citizen entrants powered down the course in order to achieve the fastest combined time of the two run event.

Sunday brought about the event that came last but certainly not least. The parallel sprint, a relatively new event to telemark racing, consists of one run through each of two courses which are set side by side. During these two runs, the qualifiers, racers are judged in the normal fashion, ski the course one at a time, and all complete the same skate section. After the completion of these two runs, consisting of the same features as the Classic and the Sprint Classic, the racers are seeded into brackets and race head-to-head against other entrants. In addition to being able to see the difference between racer’s times as numerical values, the parallel allows spectators to see the difference between one racer and another in real time, watching one complete each section of the course more quickly. In order to provide immediate results, judges with flags signal the number of penalties a racer has received down to the bottom of the course where the athlete is required to skate slightly longer distances for one or two penalties. If a racer receives 3 or more penalties during the run, they are disqualified.

This very viewer friendly format delivered a number of excellent finishes on Sunday several races determined by less than a ski length.

The Final Race - An interview with Peter McMahon