These documents were used as part of the PR package to promote the Vikin Fjord Series and National Championships.
1985-1986

“Shown here are a side view of an “unaltered” telemark boot and a close-up of the boot toe in the telemark binding mounted to the ski.  Although some racers alter their boots with plastic attachments, the manufactured boot is similar to a heavy leather hiking boot with a 1/2-inch extension of the sole from the toe.  This extension fits into the 3 pins of the binding and is held in place by a flat metal bale.  This 1/2-inch connection point offers great flexibility in foot movement but makes balance and control a challenge.  This is all that holds the skier to his skis through the high speed race courses.”  (Photography: Doug Child) 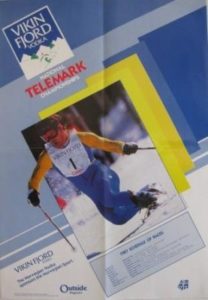 The second year of the Vikin Fjord National Telemark Series included 7 and the National Championships at Aspen, CO.  The 7 races were held at: 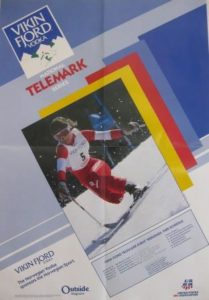 The 3rd year of the Vikin Fjord Telemark Series included stops at:

US National Championships were held in Snowbird, UT and were hosted by the Wasatch Telemark Committee (see news article)

“Whitney Thurlow, pictured above on his victory run at the 1987 Vikin Fjord Championships in Aspen, Coloardo, has won four consecutive national telemark ski championships.  Thurlow is a purist when it comes to the drop-knee telemark technique and is considered to have one of the “cleanest” styles.  A native of Maine, Thurlow is assistant ski school director at Crystal Mountain, Washington.”  (Photography:  Doug Child)

“Monte Bell, pictured above in a a characteristic growl, may be one of the top performers in this year’s Vikin Fjord Telemark Series.  An Aspen, Colorado resident, Monte spends summers kayaking Colorado’s whitewater rivers and building telemark boots.  He is an accomplished hang-glider test pilot and has been known to carry a parachute even aboard commercial airline flights.”  (Photography:  Doug Child)

“Anne Sulllivan is one of the rising stars on the Vikin Fjord Telemark women’s circuit.  Sullivan trains at her home in Stowe, Vermont and is considered to be a potential threat to western dominance in women’s telemark racing.”  (Photography:  Doug Childs)

Thank you to Jim Fox, former USSA Telemark Coordinator, who kept these Vikin Fjord files for decades and then gave them to Tory Hauser in 2014 to be used as part of this history project.