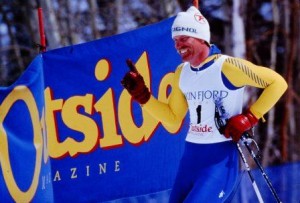 Telemark races, festivals and race series were organized in many ski areas of the US.

National Championships began in 1982 and Telemark Racing fell under the USSA umbrella for a period of time in the 1980’s and into the early 1990’s.

Races at this time included Slalom, Dual Slalom, Giant Slalom, Mogels and an “All Terrain Race” which was the precurser to todays Classic event.  Costumes were often included as part of the fun.

The first US National Team was named in 1988 based on the results of the 1987 National Championships.

Whitney Thurlow was the four time National Champion during this decade.